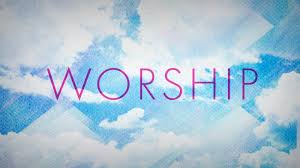 Please join us at 10 am each Sunday for a blended service of praise and worship of our great God and Savior Jesus Christ.  Ours is a blended service, opening with a couple of praise and worship songs, followed by prayers of adoration of God, a time of unison and private confession, Scripture reading, special music or a choir anthem, the proclamation of the Word, and the opportunity to give to the Lord's work, with a song of sending and a charge to go and make disciples of all nations.

Come as you are and be renewed and refreshed by the love and grace of God in Christ!

The Lord's Supper is provided on the first Sunday of each month. 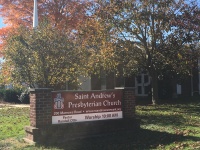 St. Andrew's Presbyterian Church is an evangelical Presbyterian congregation within the Presbyterian Church (USA).  As such, it is a biblically-based church that seeks to know, love, and serve God as he has been revealed in the Word, incarnate and in Scripture, through the power of the Holy Spirit.  Its theology is in the Reformed tradition, accenting the sovereign plan of God and the need of all for the salvation provided in Jesus Christ's atoning death and victorious resurrection from the dead as applied by the Holy Spirit.  St. Andrew's is a diverse congregation, enriched in particular by members from and its relationship with the Presbyterian Church of Cameroon on the western shores of Africa.  We rejoice in the privilege of being a part of God's plan and people and invite all to come and learn more about God and the plan and purpose he has for each of us to have peace with him, peace with each other, and peace within through Christ.

St Andrews Presbyterian Church, a congregation of believers in Jesus Christ as our Lord and Savior, pledges to share the love of GOD within our church family, the local community and the world.

To this end, we shall.... - worship GOD through preaching of the Word, celebration of the Sacraments, prayer and music  - project our Christian love by nurturing one another  - witness the love of Christ to all the world.
Vision Statement
To be a church that boldly proclaims the Good News of Jesus Christ, depends on the Holy Spirit, reflects the composition of the community and reaches out in partnership through ministries of love, caring, music and teaching to make and prepare disciples to love and serve the Lord.
We try not to take ourselves too seriously, but instead try to take seriously the Word and work of God in our lives.  Sometimes we can be a bit silly, as Cliff Wood so aptly demonstrated recently when he forgot his reading glasses and had to don a spare pair for reading Scripture!

St. Andrew's Presbyterian Church holds to the historic faith of the Christian church as expressed in the universal statements of faith of the Church, i.e., the creeds, and how those creeds have been understood in the tradition of the Reformation, our confessions.  The one God is Triune, Father, Son, and Holy Spirit.  The Father has planned all things from before the creation of the world and has a plan for each person.  He sent his only Son into the world in the fullness of time to be like human beings in all ways, except for sin, in order to be the Way, the Truth, and the Life, by whom alone we may come unto the Father.  Jesus Christ lived a perfect life and thus was without sin, as the consummate high priest offering himself, the Lamb of God, once and for all on the altar of the cross in fulfilment of all of the Old Covenant sacrifices, to make atonement for the sins of God's elect.  He rose from the dead on the third day to demonstrate his victory over sin and death and was at the ascension seated at the Father's right hand, where he lives forever to make intercession for believers.  He sent the Holy Spirit on the day of Pentecost to empower his church with gifts for proclaiming the good news of the gospel and for serving others in his name, to carry on his ministry as the body of Christ.

God has a people, variously known as Israel or the church, from the fall of Adam until the end.  All of God's elect are saved throughout redemptive history by faith in God's messiah, the Christ; in the Old Testament they looked ahead in faith to his substitutionary sacrifice in the sacrifices of the Old Covenant, and since his incarnation, death and resurrection they have looked to Jesus and all he has done in his finished work of redemption.  We invite you to become a part of that people through turning from sin in repentance and turning to Jesus Christ in faith.  He is able to change our lives and to make us new people, a "new creation" (2 Cor. 5:17) through the new birth.  Salvation is all of God's grace.  It is a free gift of God to all who will receive it.

The beliefs of the Presbyterian Church (USA) are embodied in its Book of Confessions.  Included in that Book are

The Book of Confessions is available online at https://www.pcusa.org/site_media/media/uploads/oga/pdf/boc2014.pdf.

Do you know Jesus?  Would you like to?  Give us a call and let's talk.  Or, just talk to God about it!  "If you declare with your mouth, 'Jesus is Lord,' and believe in your heart that God raised him from the dead, you will be saved. For it is with your heart that you believe and are justified, and it is with your mouth that you profess your faith and are saved.  For, 'Everyone who calls on the name of the Lord will be saved'" (Rom. 10:9-10, 13).  We're all sinners who've fallen short of the glory of God.  "The wages of sin is death, but the gift of God is eternal life in Christ Jesus our Lord" (Rom. 6:23).  Jesus paid the price for our sin.  Receive him by faith and become a new creature in him.

Early in 1954 the Wilmington Council of Churches conducted a survey of the Brookside community to determine the need for a Protestant church in the area.  In April of that year, the land on which St. Andrew's now stands was deeded to the Board of American Missions of the United Presbyterian Church.  In July of that year, Philadelphia Presbytery volunteers established a community church with services held at the Brookside public school building in the shopping center across from the present church site.

February 20, 1955 marked the official organization of St. Andrew's with public recognition of its members, approval of the church's construction, and election of elders and trustees.  In 1957 the church became self-supporting, thus no longer a mission church.  When a decision was made as to the naming of the church, it was felt the name should says something of the people within and of their responsibility to share the message of Christ.  When the members of the congregation were asked to offer suggestions for the name of the church, "St. Andrew's" was chosen as the most appropriate name and description of the congregation, since it calls to mind both the person of Andrew the apostle as well as the Scottish origin of the Presbyterian Church.  The apostle Andrew was the first person to join Jesus, having been a disciple of John the Baptist and present at the baptism of Jesus.  Andrew then became the first to bring others to Jesus by presenting his brother Peter to the Lord.

In 1958 the United Presbyterian Church of North America merged with the Presbyterian Church, USA and St. Andrew's became a member of New Castle Presbytery.  On August 31, 1988, the Rev. Herb Hoeflinger honorably retired after serving almost 30 years as pastor of the church.  After some interims and short pastorates, in 2001 the Rev. Dr. John Paderson became pastor and served until June 30, 2016, when he retired.